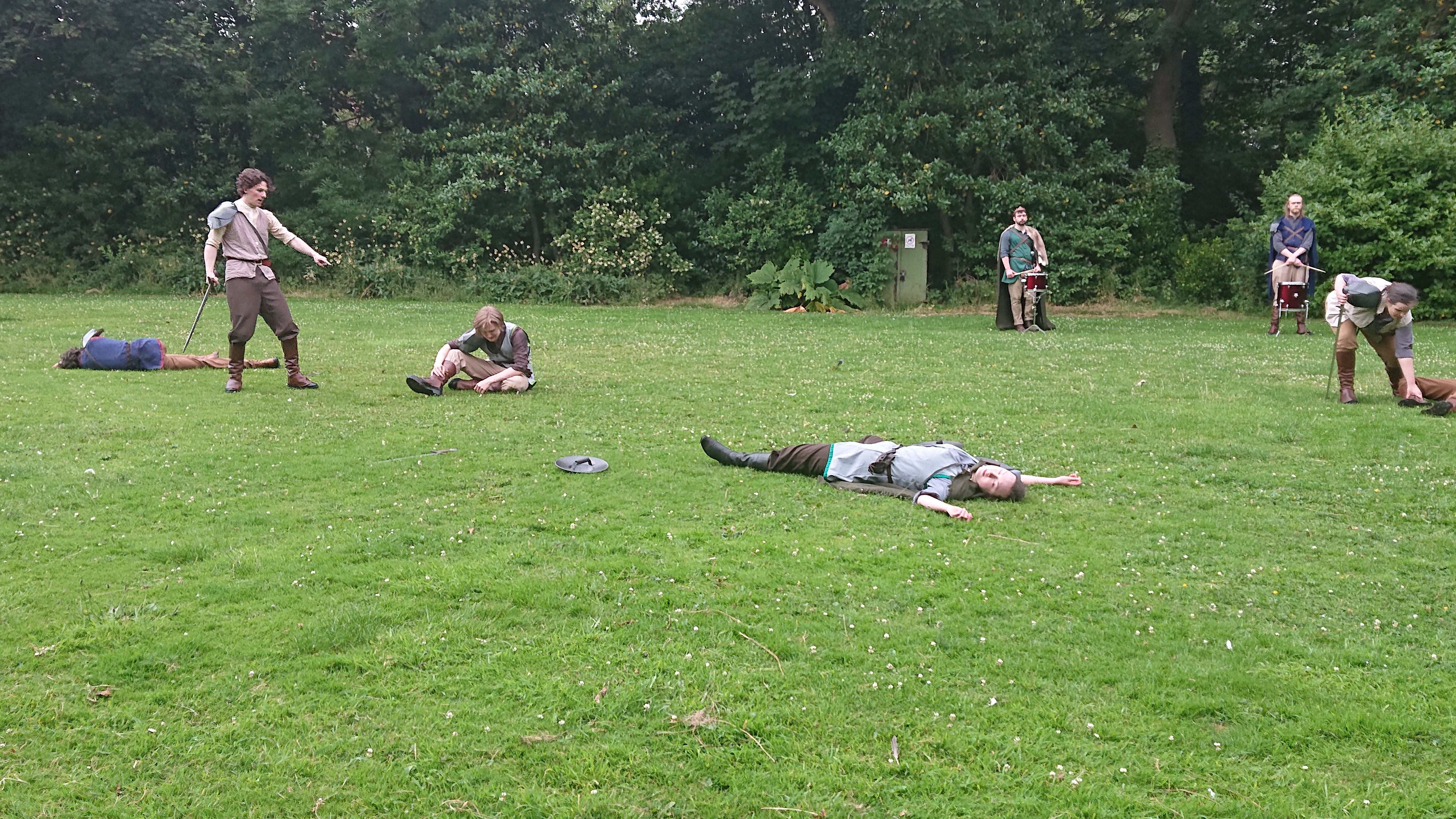 I love Shakespeare, I really do. Obviously that’s no surprise to those who know me, but there is a point to me declaring my undying love on here.

Every year, Corinne Kilvington with Theatre Space NE put on “Plays in the Park”, with the exception of last year, and I shall come onto that shortly. Naturally this year I went to Henry V in Roker Park.

Now, the quality is always high, but this year it was out of the park, pardon the pun.

Henry V is a difficult play. The audience are actually told throughout that they’re watching a play, and are begged to use their imagination. In the age of CGI in films, and elaborate sets on stage, that’s a heck of an obstacle to overcome, but overcome it this troop did.

Further challenges involve the numerous accents required, and the ability to speak fluent French, but the cast rose and surpassed these potential pitfalls, a credit to Corinne’s eye and expectation of excellence. Plus, this is no static play, but the whole point of it being in an outdoor space is to utilise the space. The audience follow the cast around, meaning that the actors not only have lines and blocking to learn, but the rigours of different terrain, changing in bushes, where necessary, and staying in character while sometimes running between locations. This makes the whole thing a physical feat for our thesps, especially, if like today, the weather threatens.

I have nothing but admiration for the commitment to the task shown by this talented bunch, and believe me, I can be very critical if chinks show in something.

Not only that, but rather brilliantly, the audience is divided into English and French, and as we moved from scene to scene, there were English routes and French routes, and at moments of great speeches, each King would appeal to his segment of the audience. Audience-participation in Shakespeare – yes, and it worked.

Now as to why this is a project that should continue. Last year, no funding came through for it, so it didn’t run. We all know the Arts in this country are under attack, and that Theatre is becoming an increasingly elite, yet here is something that is truly of the people for the people. Tonight, there were at least 5 Primary School aged children, who stayed for the entire 1 hour 45 mins, watched in silence, without having to be told, and one little boy filmed it because he was so into it.

I’m an advocate of going to the theatre, as you all know, but where that is an unobtainable thing, where do people go to introduce their children to Shakespeare, or Marlowe, or Jonson. This is perfect. The whole thing is sold as an adventure, which it is, as you don’t know which location you’re moving to next, and because it’s in a park, it’s really intimate; you are right there in the moment with the actors. That is our children need to see.

Theatre isn’t stuffy, silent, and rigid. It’s exciting, even life-changing. And, why not encourage our children to aspire to something that’s right there, not miles away on a Proscenium arch, behind the fourth wall, and by that I don’t mean don’t take your children to the theatre, do, but if you want a truly visceral performance, then “Plays in the Park” is it.

The Arts are a vital part of human existence. They tell us who we are, or allow us to find that out. They both support and challenge our perceptions. They are our safe spaces to explore new ideas and create new concepts. They teach us empathy, tolerance, and to consider the consequences to our actions.

In terms of this Art, I know what people’s perceptions of Shakespeare can be. And if you want to see something that breaks any idea of it being inaccessible, elitist, and out of touch, then this is it.

Moreover, this is local. It showcases what we can do, and that should be celebrated.

So get yourselves along to Roker Park, Saturday 20th or Sunday 21st July at 7pm. You won’t regret it.